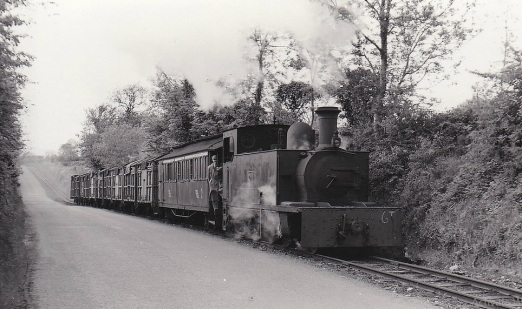 ​ The Cavan & Leitrim Railway was one of the most fascinating and at one time, the busiest of Ireland’s narrow-gauge railways. It remained open years after most of the other 3ft gauge lines closed. The C&L was the only passenger Narrow Gauge line steam operated line all through its life.

In 1883 the Cavan, Leitrim and Roscommon Light Railway and Tramway Co. was founded under the terms of the Tramways (Ireland) Act. Its first section, some 34 miles long, and 3ft gauge, was opened in 1887 linking the Midland and Great Western broad-gauge station at Dromod to the corresponding Great Northern facility at Belturbet. A branch from Ballinamore to Arigna was opened the next year. ​

​ For the first 20 years or so passenger traffic, both regular and excursion, ran well. Light freight including tea, sugar, alcohol and cloth was big business, carried to local stations to be collected by merchants from the surrounding districts. Heavy freight consisted mainly of cattle. Huge fairs like the Monaghan Fair and the twice-yearly fair at Ballymagovern were the mainstay of the narrow gauge as northern buyers were able to move stock readily via the local station and the G.N.R. The railway became the Cavan and Leitrim in 1895. Roscommon decided to decline membership of the Railway; the reason was that all county’s that the train operated in would be liable to pay any deficient in the operating costs of the line which would be paid out of local rates. At the start of the twentieth century the railway possessed nine locomotives, all built by Robert Stephenson and Co.

At this time the directors faced hostile public opinion and struggled vainly for many years to extend its line to the Arigna coal fields. When the extension was finally built in 1920 the political temperature in Ireland was rising, and the initiative was taken by the Government. It was fortuitous that the Arigna line opened when it did. In 1922, the C&L suffered a considerable loss in its trading, with the imposition of partition which cut off a large part of its cattle business. As it was the extension greatly enhanced the railway. Coal was carried to the main lines heading for Limerick and the cement works at Drogheda. Transhipment was a logistical problem since, when the coal arrived at Dromod and Belturbet via the Cavan and Leitrim, it had to be shovelled manually from its wagons into the wagons of the broad gauge. ​

​ In 1924, the new Free State Government introduced a Railways Act in an attempt to rationalise and protect the railway sector. All railways were merged into a State-run company called Great Southern Railways. The once proudly independent Cavan and Leitrim Railway Company was no more. It was reduced to the role of a subsidiary. During the thirties the line maintained a precarious existence.

The war years led to a respite as coal proved to be a lifeline, and the railway coped successfully with coal traffic of often mammoth proportions. In 1945, a new State transport company incorporating both road and rail transport was set up, replacing the GSR. Cutbacks in the rail service followed but the narrow gauge held out. In the 1950s the old Cavan and Leitrim line was virtually dependent on the coal traffic to Irish Cement at Drogheda. In its last days it made use of engines and rolling stock sent from narrow gauge systems which had closed. However, by 1956, coal carriage was no longer viable. The railway finally succumbed on March 31st 1959, the penultimate Irish narrow gauge system to go (the last being the West Clare Railway). A section of the line was reopened by preservationists in 1994.